The Medal of Honor is the highest award for valor
in action against an enemy force which can be bestowed
upon an individual serving in the Armed Services of the United States. 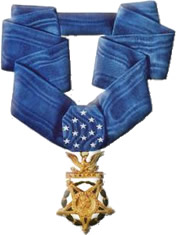 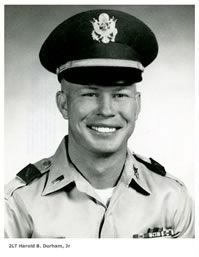 Citation: 2LT Durham, Artillery, distinguished himself by conspicuous gallery and intrepidity at the cost of his life above and beyond the call of duty while assigned to Battery C. 2nd Lt Durham was serving as a forward observer with company D, 2nd Battalion, 28th Infantry during a battalion reconnaissance-in force mission. At approximately 10:15 hours contact was made with an enemy force concealed in well camouflaged positions and fortified bunkers. 2LT Durham immediately moved into an exposed position to adjust the supporting artillery fire onto the insurgents. during a brief lull in the battle he administered emergency first aid to the wounded in spite of heavy enemy sniper fire directed toward him. Moments later, as enemy units assaulted friendly positions, he learned that Company A, bearing the brunt of the attack, had lost its forward observer. While he was moving to replace the wounded observer, the enemy detonated a claymore mine, severely wounding him in the head and imparting his vision. In spite of the intense pain, he continued to direct the supporting artillery fire and to employ his individual weapon in support of the hard pressed infantrymen. As the enemy pressed their attack, 2LT Durham called for supporting fire to be placed almost directly on his position. Twice the insurgents were driven back, leaving many dead and wounded behind. 2LT durham was then taken to a secondary defensive position. Even in his extremely weakened condition, he continued to call artillery fire onto the enemy. He refused to seek cover and instead positioned himself in a small clearing which offered a better vantage point to adjust the fire. Suddenly, he was severely wounded a second time by enemy machine gun fire. As he lay on the ground near death, he saw 2 Viet cong approaching, shooting the defenseless wounded men. With his last effort, 2LT Durham shouted a warning to a nearby soldier who immediately killed the insurgents. 2LT Durham died moments later, still grasping the radio handset.

2LT Durham’s gallant actions in close combat with an enemy force are in keeping with the highest traditions of the military service and reflect great credit upon himself, his unit, and the U.S. Army. 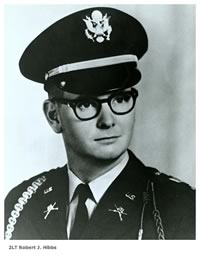 Citation: For conspicuous gallantry and intrepidity at the risk of life above and beyond the call of duty. 2LT Hibbs was in command of a 15-man ambush patrol of the 2d Battalion, when his unit observed a company of Viet Cong advancing along the road toward the 2nd battalion’s position. Informing his command post by radio of the impending attack, he prepared his men for the oncoming Viet Cong, emplaces two mines in their path and, when the insurgents were within 20 feet of the patrol’s position, he fired the 2 anti-personnel mines, wounding or killing half of the enemy company. Then, to cover the withdrawal of his patrol, he threw hand grenades, stepped onto the open road, and opened fire on the remainder of the Viet Cong force of approximately 50 men. Having rejoined his men, he was leading them toward the battalion perimeter when the patrol encountered the rear elements of another Viet Cong company deployed to attack the battalion. With the advantage of surprise, he directed the charge against the Viet Cong, which carried the patrol through the insurgent force, completely disrupting its attack. Learning that a wounded patrol member was wandering in the area between the two opposing forces and although moments from safety and wounded in the leg himself, he and a sergeant went back to the battlefield to recover the stricken man. After they maneuvered through the withering fire of 2 Viet Cong machine guns, the sergeant grabbed the dazed soldier and dragged him back toward friendly lines while 2LT Hibbs remained behind to provide covering fire. Armed with only a M-16 rifle and a pistol, but determined to destroy the enemy positions, he then charged the 2 machine gun emplacements and was struck down. Before succumbing to his mortal wounds, he destroyed the starlight scope attached to his rifle to prevent its capture and use by the Viet Cong.

2LT Hibbs profound concern for his fellow soldiers, and his intrepidity at the risk of his life and beyond the call of duty are in the highest traditions of the U. S. Army and reflect great credit upon himself and the Armed Forces of his country. 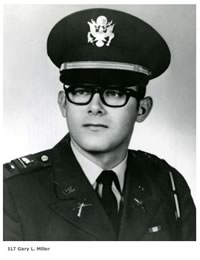 Citation: For conspicuous intrepidity and gallantry in action at the risk of his life above and beyond the call of duty. 1LT Miller, Company A, was serving as a platoon leader at night when his company ambushed a hostile force infiltrating from Cambodian sanctuaries. After contact with the enemy was broken, 1LT Miller led a reconnaissance patrol from their prepared positions through the early evening darkness and dense tropical growth to search the area for enemy casualties. As the group advanced they were suddenly attacked. 1LT Miller was seriously wounded. However, the group fought back with telling effect on the enemy force. An enemy grenade was thrown into the midst of the friendly patrol group and all took cover except 1L Miller, who in the dim light located the grenade and threw himself on it, absorbing the force of the explosion with his body. His action saved the nearby members of his patrol from almost certain serious injury.

The extraordinary courage and selflessness displayed by this officer were an inspiration to his comrades and are in the highest traditions of the U. S. Army. 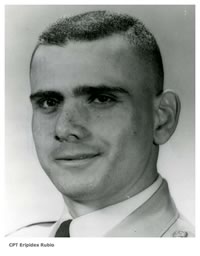 Citation: For conspicuous gallantry and intrepidity at the risk of life above and beyond the call of duty. CPT Rubio, Infantry, was serving as communications officer, 1st Battalion, when a numerically superior enemy force launched a massive attack against the battalion defensive position. Intense enemy machine gun fire raked the area while mortar rounds and rifle grenades exploded within the perimeter. Leaving the relative safety of his post, CPT Rubio received two serious wounds as he braved the withering fire to go to the area of the most intense action where he redistributed ammunition, re-established positions and rendered aid to the wounded. Disregarding the painful wounds, he unhesitatingly assumed command when a rifle company commander was medically evacuated. CPT Rubio was wounded a third time as he selflessly exposed himself to the devastating enemy fire to move among his men to encourage them to fight with renewed effort. While aiding the evacuation of wounded personnel, he noted that a smoke grenade which was intended to mark the enemy position for air strikes had fallen dangerously close to the friendly lines. CPT Rubio ran to reposition the grenade but was immediately struck to his knees by enemy fire. Despite his several wounds, CPT Rubio scooped up the grenade, ran through the deadly hail of fire to within 20 meters of the enemy position and hurled the already smoking grenade into the midst of the enemy before he fell for the final time. Using the repositioned grenade as a marker, friendly air strikes were directed to destroy the hostile positions. CPT Rubio’s singularly heroic act turned the tide of battle, and his extraordinary leadership and valor were a magnificent inspiration to his men.

His remarkable bravery and selfless concern for his men are in keeping with the highest traditions of the military service and reflect great credit upon CPT Rubio and the U.S. Army. 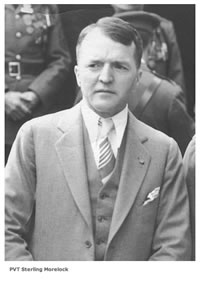 Citation: While his company was being held up by heavy enemy fire, Pvt. Morelock, with three other men who were acting as runners at company headquarters, voluntarily led them as a patrol in advance of his company’s frontline through an intense rifle, artillery and machine gun fire and penetrated a woods which formed the German frontline. Encountering a series of 5 hostile machine gun nests, containing 1 to 5 machine guns each, with his patrol he cleaned them all out, gained and held complete mastery of the situation until the arrival of his company commander with reinforcements, even though his entire party had become casualties. He rendered first aid to the injured and evacuated them by using stretcher bearers 10 German prisoners whom he had captured. Soon thereafter his company commander was wounded and while dressing his wound, Pvt. Morelock was severely wounded in the hip, which forced his evacuation.

His heroic action and devotion to duty were an inspiration to the entire regiment. 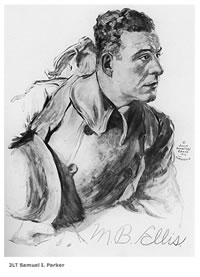 Citation: During the entire days engagement he operated far in advance of the first wave of his company, voluntarily undertaking most dangerous missions and single handedly attacking and reducing machine gun nests. Flanking one emplacement, he killed 2 of the enemy with rifle fire and captured 17 others. Later he single handedly advanced under heavy fire and captured 27 prisoners, including 2 officers and 6 machine guns, which had been holding up the advance of the company. The captured officers indicated the location of 4 other machine guns, and he in turn captured these, together with their crews, at all times showing marked heroism and fearlessness.

Citation: For conspicuous gallantry and intrepidity above and beyond the call of duty. During the attack the 2nd and 3rd Battalions of the 28th Infantry were merged, and after several hours of severe fighting, successfully established a frontline position. In so doing, a gap was left between the right flank of the French 153d Division on their left and the left flank of the 28th Infantry, exposing the left flank to a terrific enfilade fire from several enemy machine guns located in a rock quarry on the high ground. 2LT Parker observing this serious situation, ordered his depleted platoon to follow him in an attack upon the strong point. Meeting a disorganized group of French colonials wandering about, he persuaded them to join his platoon. This consolidated group followed 2LT Parker through direct enemy rifle and machine gun fire to the crest of the hill, and rushing forward, took the quarry by storm, capturing 6 machine guns and about 40 prisoners. The next day when the assault was continued, 2LT Parker in command of the merged 2nd and 3rd Battalions was in support of the 1st Battalion. Although painfully wounded in the foot, he refused to be evacuated and continued to lead his command until the objective was reached. Seeing that the assault battalion was subjected to heavy enfilade fire due to a gap between it and the French on its left, 2LT Parker led his battalion through this heavy fire up on the line to the left of the 1st Battalion and thereby closed the gap, remaining in commands of the battalion until the newly established lines of the 28th Infantry were thoroughly consolidated. In supervising the consolidation of the new position, 2LT Parker was compelled to crawl about on his hands and knees on account of his painful wound. His conspicuous gallantry and spirit of self-sacrifice were a source of great inspiration to the members of the entire command.