The regimental crest, motto and song for the 28th Infantry Regiment originated after World War I. Although the exact dates are unknown, there is existing information about all three of these items.

The designer of the regimental crest in 1920 was Captain (later Brigadier General) James W. Curtis, who commanded K Company 28th Infantry Regiment during World War I. He was the regimental adjutant for a period while the Regiment had its headquarters at Fort Niagara, NY in the interwar years. In a letter written to his son (then a company commander of M Company 28th Infantry Regiment) in 1951, Brigadier General Curtis (Ret) stated:

The regimental crest was designed by me when I was regimental adjutant. It was approved by the War Department, Department of Heraldry. The 28th Infantry was the first American unit to engage in combat in the First World War and the action took place at Cantigny in the Province of Picardy. The ancient coat of arms of Picardy has three black lions on a silver shield. For purposes of the regimental crest, we used one of these black lions on a silver shield…

The regimental motto was adopted circa 1920. It is a take-off of the 1st Division Motto, “No mission too difficult, no sacrifice too great, duty first”, as the 28th Infantry was a part of the 1st Division throughout World War I and until 1940. An interesting point about the motto itself is that it was one of the first mottos ever used by the American military. The first personal medals ever awarded to American soldiers were the so called “Andre Medals” which were awarded to the three men who captured Major John Andre, the British officer who negotiated the attempted surrender of the fortress at West Point with Benedict Arnold during the revolutionary war. The United States gave a special award to these three men in 1780. On the reverse side of these medals (two of which are now in the New York State Historical Society) was an inscription, Vincit Amor Patriae, thus the 28th Infantry Regiment’s motto has ties to the very earliest history of the U.S. Army.

Our Coat Of Arms artwork has been restored to its exact heraldry and has been donated to the Institute Of Heraldry. 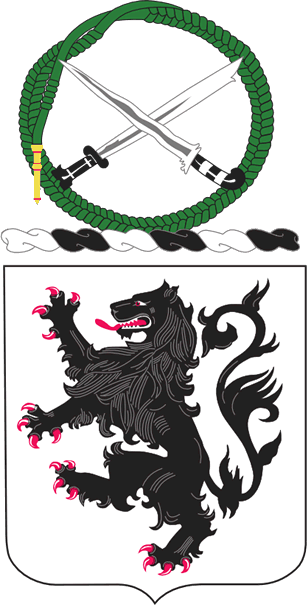